(Awarded to most promising player in 10&under, 12&under, 15&under solo classes) 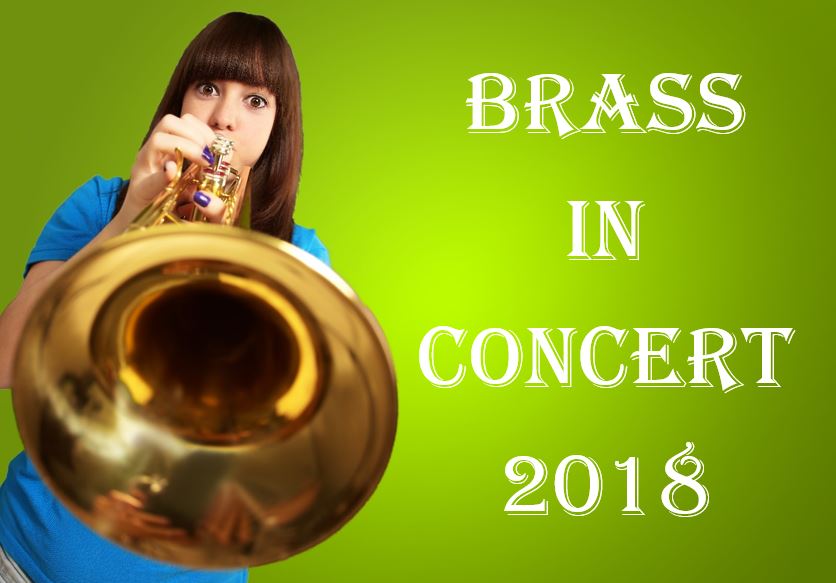 The Brass Band League are delighted to announce the line-up for our upcoming Brass in Concert weekend in the Valley Hotel, Fivemiletown.

Over the course of the weekend we will feature 20 performances from some of Northern Ireland’s best brass bands.

On Friday 23rd February, our first band will take to the stage at 7pm. Line-up for the evening is:

Saturday 24th will see 13 bands take part in an entertainment competition with first band onstage at 11am. Each band will each perform a mini concert programme with their performance assessed by a panel of judges on its musical and entertainment qualities. Bands taking part on the day are:

Both events are pay at door.

Start time for both Junior & Senior sections on the day will be 9.30am.

With 175 entries across Junior and Senior sections, the event promises to showcase the talents of brass musicians from across Northern Ireland.

We are now able to publish timings for the day along with the draw for the Junior Sections. Due to closed adjudication, the senior section draw cannot be published online and will be emailed directly to secretaries of competing bands.

Please note that timings are approximate. Competitors should allow for withdrawals and be prepared to be called early. 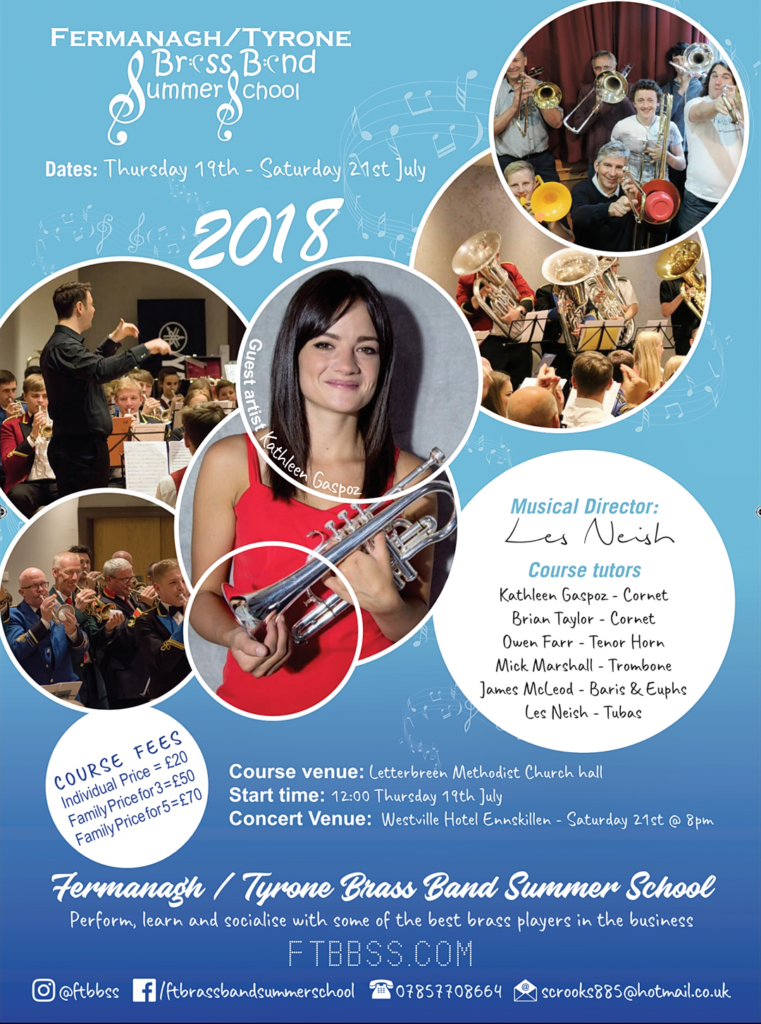 FTBBSS.com gives participants the opportunity to perform, learn and socialise with some of the best brass players and educators in the business.

We’re pleased to announce the Guest Artist for 2018 is Kathleen Gaspoz. Kathleen is without doubt a ground breaking musician, recently becoming the principal cornet of the famous Brighouse and Rastrick Band. The first female principal cornet in the band’s 136 year history!!

Alongside Kathleen on cornet we have the charismatic Mr Brian Taylor who brings a fantastic wealth of experience to the line up. With Artistic Advisor Owen Farr taking lead on the Horns we welcome new to the team local man Mick Marshall from the RTÉ Concert Orchestra on Trombone. James McLeod will put the Euphs & Baris through their paces while Musical Director and Co-founder of FTBBSs.com Mr Les Neish brings the band together for the end of course concert.

We strive to bring you a fantastic experience at a small cost of £20 for the three days music making. It will include rehearsals, sectionals, Q&A sessions, masterclasses and recital. This all takes place in a relaxed atmosphere with a particular highlight being the Fantastic Phairgrylls BBQ on the Friday evening also to include the NEW LIVE QUIZ.

If you’re travelling to the Summer School from further afield why not make your trip into a mini-break. We have links with many local B&B’s & hotels and will happily assist you in this.

This fun, relaxed course is open to all ages and all abilities. Just turn up, pick a seat and away you go! 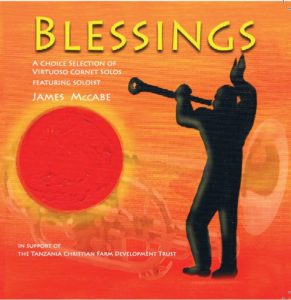 Former Co-Principal cornet of the Black Dyke Band and Northern Ireland native, James McCabe’s  first solo CD entitled ‘Blessings’ is now available.  Sales of the CD are in aid of the Tanzanian Christian Farm Development Fund- a children’s home for babies and young children. (www.tcfdt.org)  The home is run by John and Pauline Tuff from Cullybackey, County Antrim who moved to Tanzania in April 2013 and are now looking after 25 children (and counting!).  Funds are required to finish a new building and support the development and education of the children there.

The music on the CD features Belfast Salvationist composer David Catherwood on 2 tracks with arrangements of popular gospel tunes such as ‘Come Thou fount of every blessing’ and ‘When He Cometh’.  Variations on Rule Britannia and James’s own arrangement of Bonnie Mary of Argyle are also included amongst classical music of Faure.

The front cover features Irish artist Ricky Darling, who, like James has been out to mission projects supported by Northern Ireland folk in Tanzania.

A promotional video is available for viewing at  www.youtube.com/watch?v=OZlpaCs3TY4

The CD is available to purchase from James’s website address:   www.james-mccabe.co.uk

The Brass Band League (NI) returned to Queen’s University Belfast on Saturday 25th November to stage their ever popular Festival of Brass contest in the University’s Whitla Hall.

Warrenpoint Silver, despite being the only band in the 4th section, got the day off to a strong start with a varied programme which saw music from Germany, Ireland, Mexico, France and Russia.

Irish contenders Lourdes Brass Band achieved a clean sweep in the 2nd section, top placed for music and entertainment, Best March for Voice of the Guns and Best Soloist for their principal cornet Mark Newman’s simply lovely rendition of Langford’s classic arrangement off My Love is Like a Red, Red Rose

Next up were the youth bands. Despite a strong performance, challengers Downshire Brass Youth were unable to snatch the title from long-time champions 1st Old Boys’ Youth Band who once again claimed 1st prize with their principal horn Daniel Sharpe taking the soloist prize for Untold Story and their performance of Rimmer’s Slaidburn claiming the prize for Best March.

After a short break the Championship bands brought the day to a rousing close. 1st Old Boys senior band followed in the footsteps of their not-so-senior counterparts to claim 1st prize along with awards for Most Entertaining Band and Best Soloist for Alan Haworth’s performance of his own arrangement of Delilah. Third Carrickfergus took home the prize for Best March for Rimmer’s Cross of Honour.

The Brass Band League would like to take this opportunity to thank Michael Alcorn and the team at Queen’s University Belfast for the huge amount of effort they put in to hosting the event. Also, our music adjudicator Leigh Baker and our 2 entertainment adjudicators Paula McHugh and Meaghan Lyons who were both engaged at very short notice due to unforeseen circumstances.

The Brass Band League would also like to offer their congratulations to all prize winners and thanks to all participating bands for a fine day of music making.

Our adjudicators on the day will be:

Entry packs are now available on our downloads page

The BBL are now encouraging entries in electronic format in order to reduce the amount of processing involved and the possibility of errors being introduced. We request that participants use the Excel sheet to record their entries. If Excel is not available bands may request a google sheet which can be completed on any computer or smartphone.

As a last resort, traditional paper-based forms may be used, however these should be the exception. 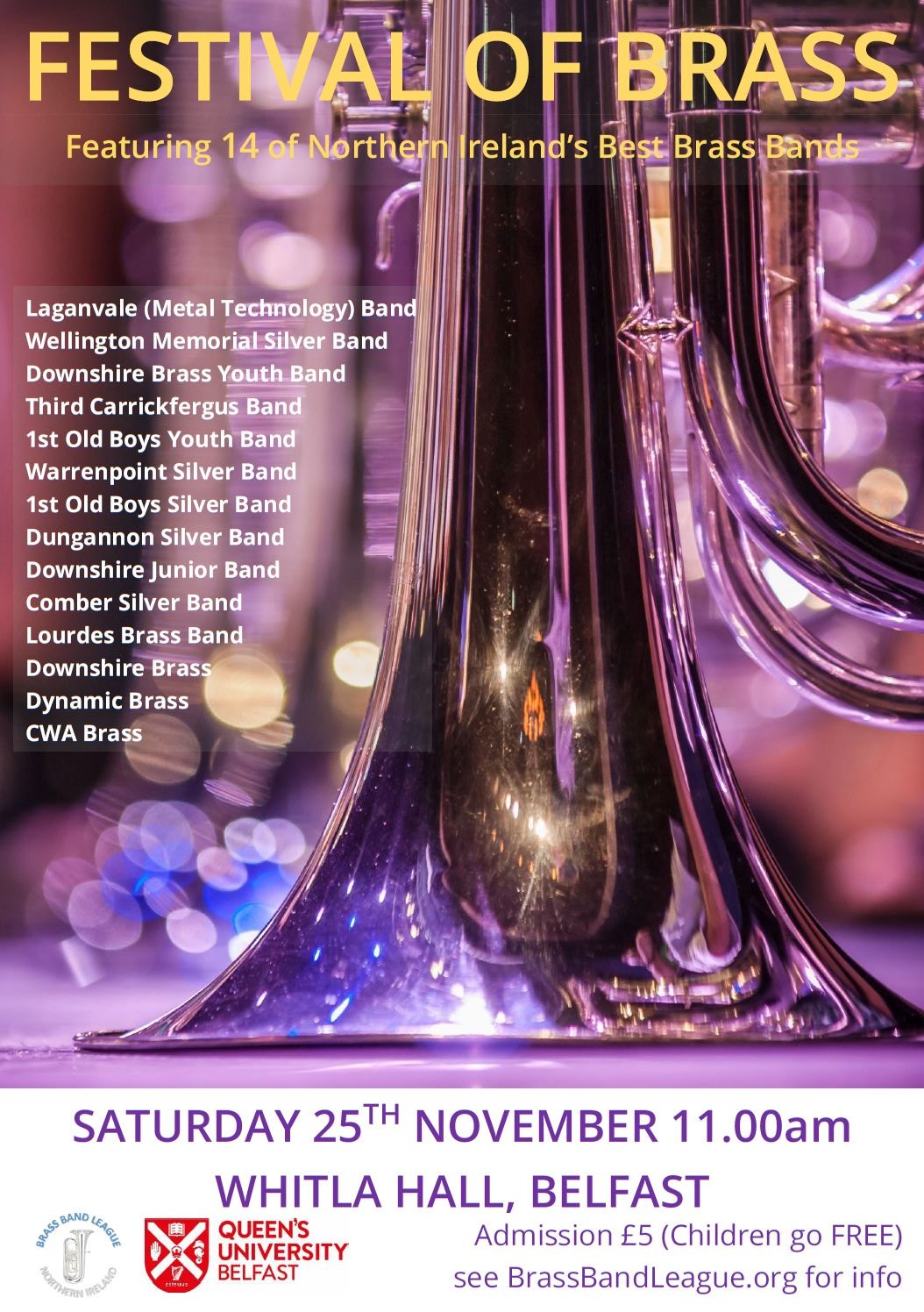 The Brass Band League are delighted to announce the return of our ever popular Festival of Brass.

14 brass bands will descend on the fabulous Whitla Hall at Queen’s University on Saturday 25th November for what promises to be a fantastic day of music making.

Each band will perform a mini-concert programme ranging from 10-25 minutes, depending on grade, with a panel of adjudicators judging each performance on its musical and entertainment qualities.

The first band will take to the stage at 11am with last band due to finish around 7:30pm

Admission is £5 at the door (children go free) and audience members can come and go as they please on presentation of their ticket.

It was with great sadness that the Brass Band League learned of the death of our esteemed Vice President John Patton on Friday.

John was a stalwart of the local banding community and was well known by many. He will be dearly missed.

Our old website was only 7 years old but it had ran its course and was really starting to look a bit tired.

We are now delighted to announce our brand new site. It’s built on wordpress technology which means it should be easier to keep up to date with NI brass banding related news.

It will take little while to upload and prepare the content from our old site so please be patient. 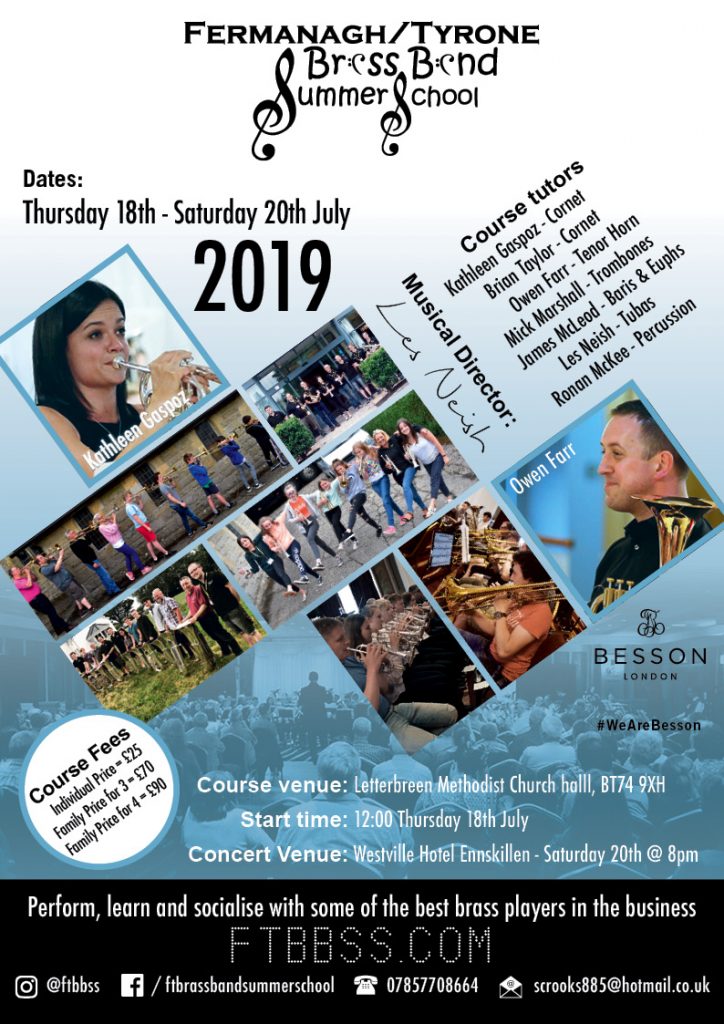